Friends are the people who are there for you through all your thick and thins, support you in every decision you make, and cheer for you always to do better than you are. They want nothing but the best for you. But life is not only about good things and good people. Sometimes, an enemy makes their way to your life disguised as a friend to bring you down, called a fake friend.

So it would be best if you always were careful who you trust and call a friend. If you also have met such fake people, here are some fake friends quotes.

Do not forget that the world is full of fake people. And you might be the victim of that fakeness. So, trust no friendship or relationship. 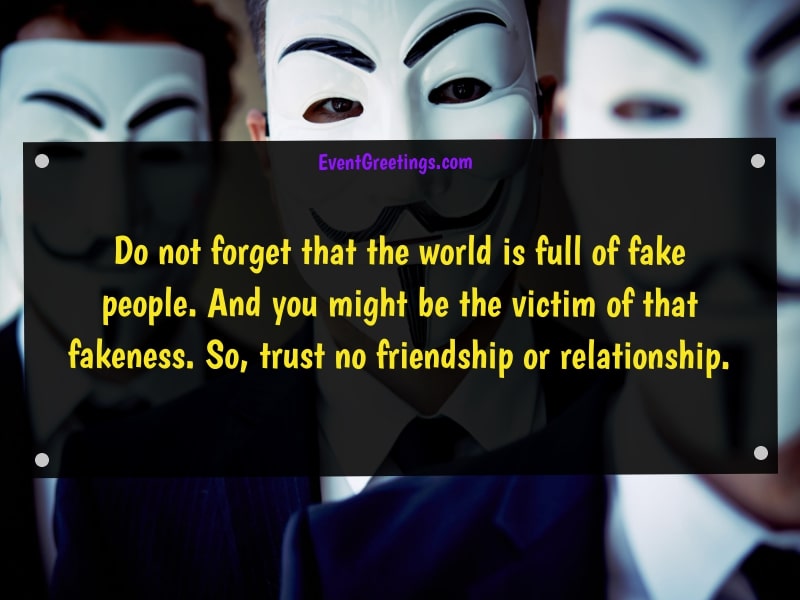 Some people can take you for granted. The love you give, the times you support, and everything you do for them can mean nothing if they don’t appreciate it enough. 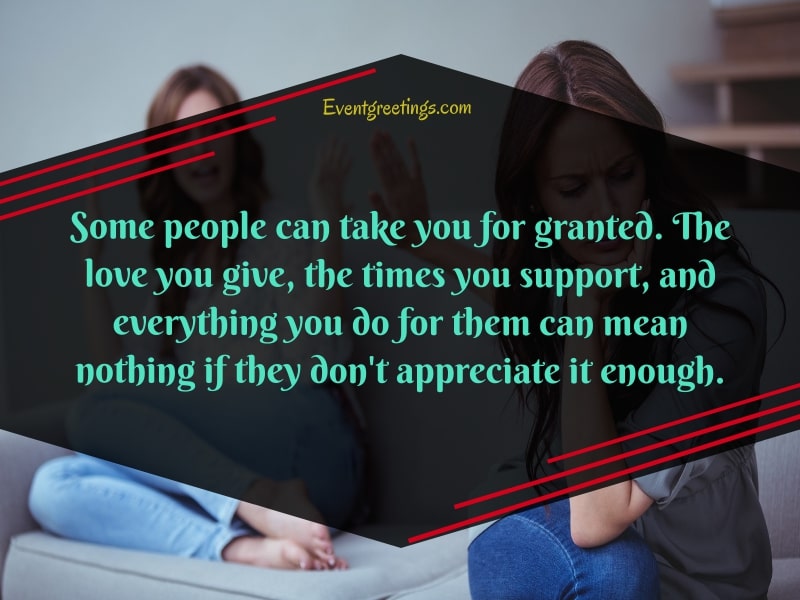 Life is not only about beautiful things. But also fake things and fake people whom we call friends. Be careful before placing your trust in someone. 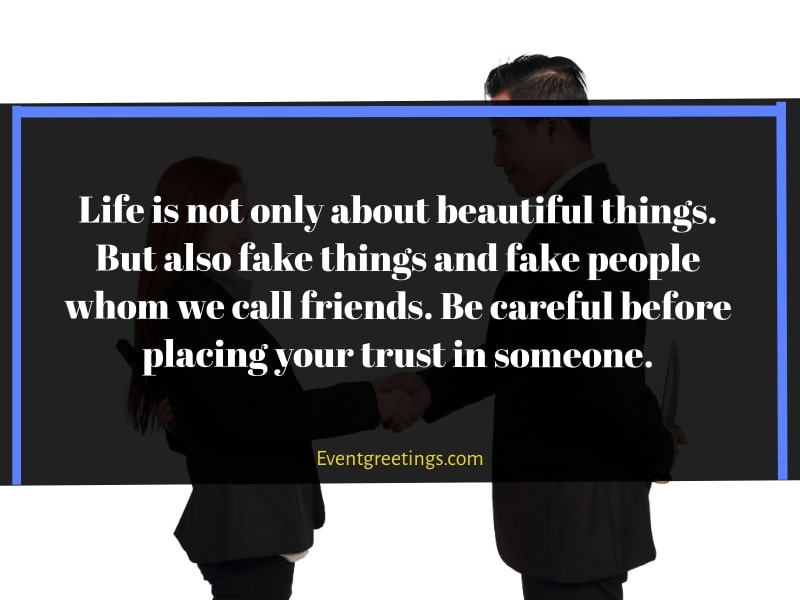 We often get betrayed by the people we thought would never do bad to us. And that is the sad reality of this real-world full of fake people.

Forever is a long time. So don’t think of anyone staying for such a long time unless they actually do. Fake promises is what people do nowadays.

Friendships, where your existence is not appreciated, is not actually a friendship. It’s a betrayal. If you’re not appreciated enough, cut them off from your life. 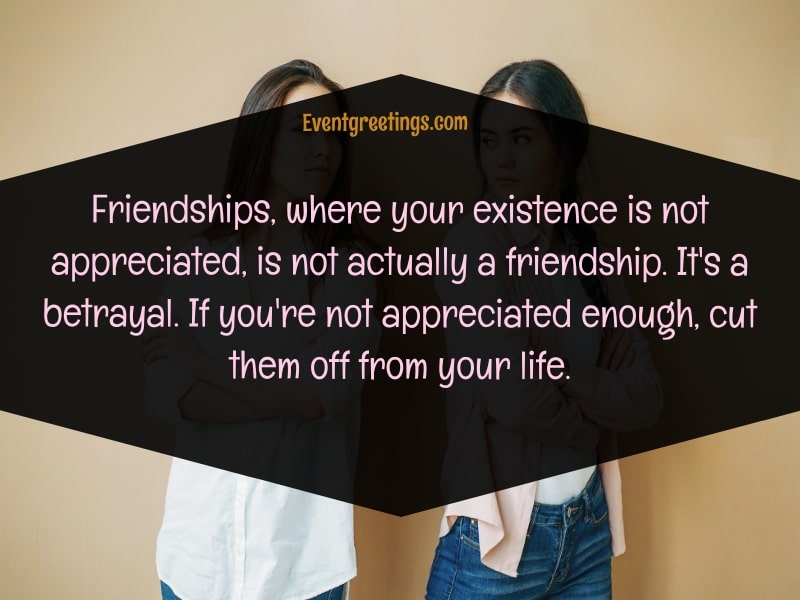 I know it’s hard to let go of people who have a lot of memories with. But there’s no point in saving such a relationship where memories haunt us while they’re right beside us.

Know your worth and walk out of the lives of fake people. Friendships and relationships are often meant to give happiness, not betrayal.

If one friend is gone, another will come. You won’t be alone forever. But never be with someone who takes you for granted. Never pour your energy into something unnecessary.

Fake people have the tendency to leave you once they are done receiving all the things that you can offer. Stay away from such people. 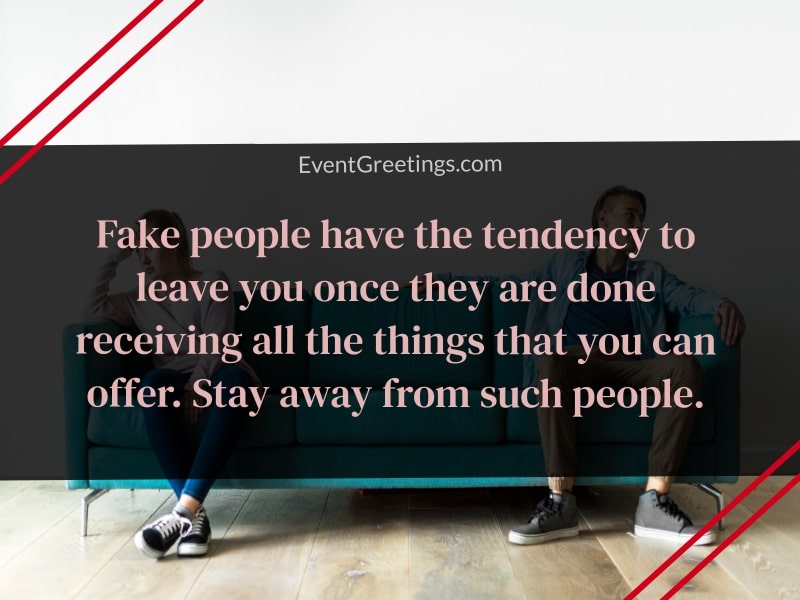 It doesn’t matter if it’s a relationship or friendships; when one is broken, it hurts equally, especially when the significant other is the reason behind it.

Life becomes miserable when you are surrounded by fake people. So, be wise when you choose whom to let in your life.

You will encounter many fake people throughout your life. If you ever come across them, show them how happy you are without their presence.

Someone who talks highly of you in front of you can talk disgustingly behind your back. We never know who they are until their mask falls off. 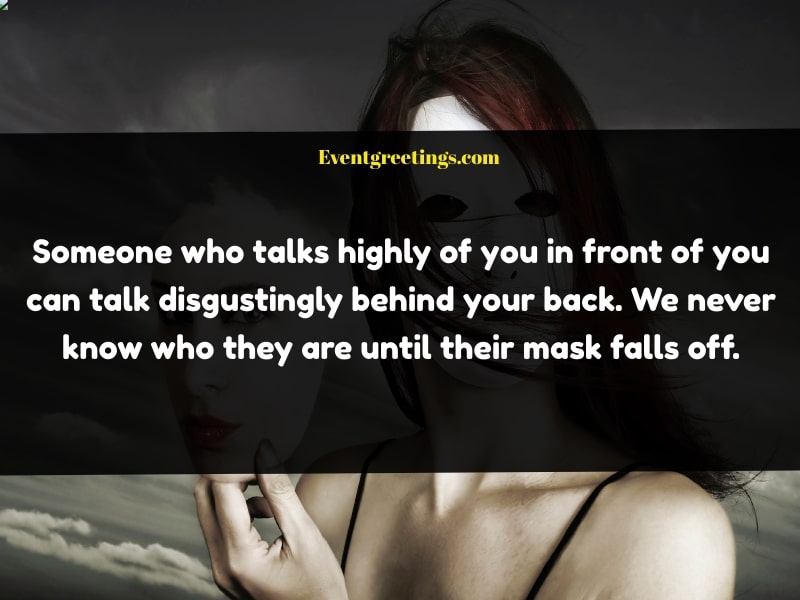 Trust is precious. Once it is broken, it can haunt you for a lifetime. Always be careful who you place your trust in.

It takes a long time to build trust, but it doesn’t take a minute to break it. It’s like broken glass; once broken, it can never be the same again.

Fake people can drain the positive energy out of you and leave you only with negativity. Because that is what they are good at.

Fake people find ways to ruin your life one way or the other. So make sure to monitor everyone’s behavior. You never know he/she might be your friend. 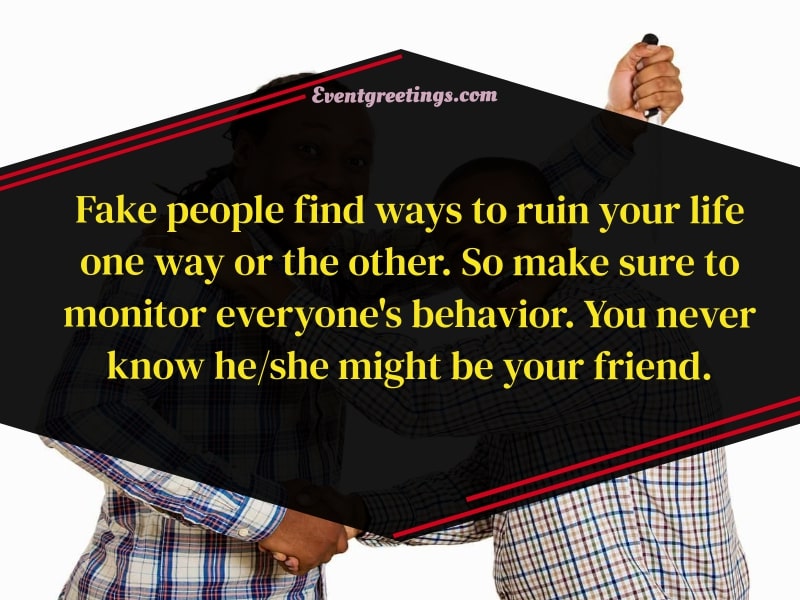 There should not be a place for negative people in your life. Once they stay in your heart, you will only have negativity around you. 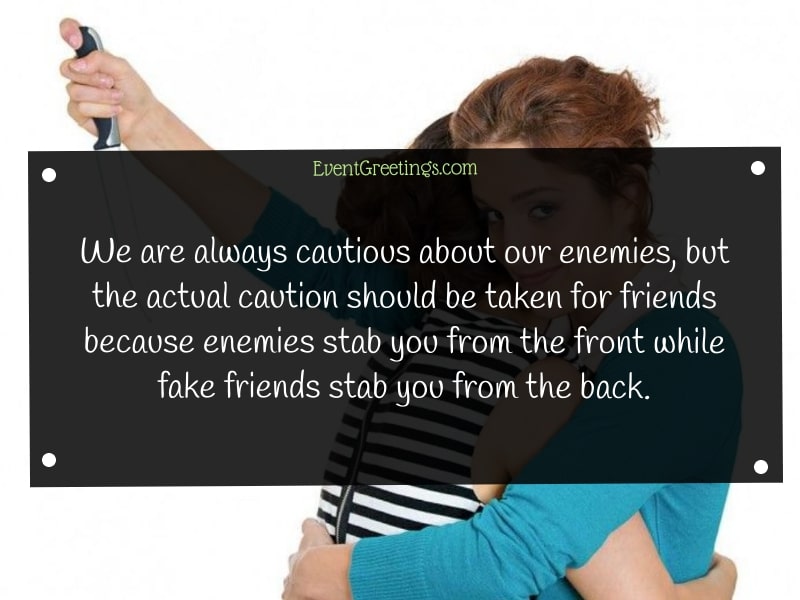 The most significant step towards loving yourself is letting go of toxic people like fake friends. They only pretend to be good but want the worse for you.

Just because you have good memories together doesn’t mean you should keep them in life. Because life is not about memories, it’s about live moments.

Always remember whom you share your problems with. Friends will help you find solutions, while fake friends will be the reason behind it.

Friends would want to see you do better in life, but fake ones are always up to bringing you down. Know the difference and act according to it. 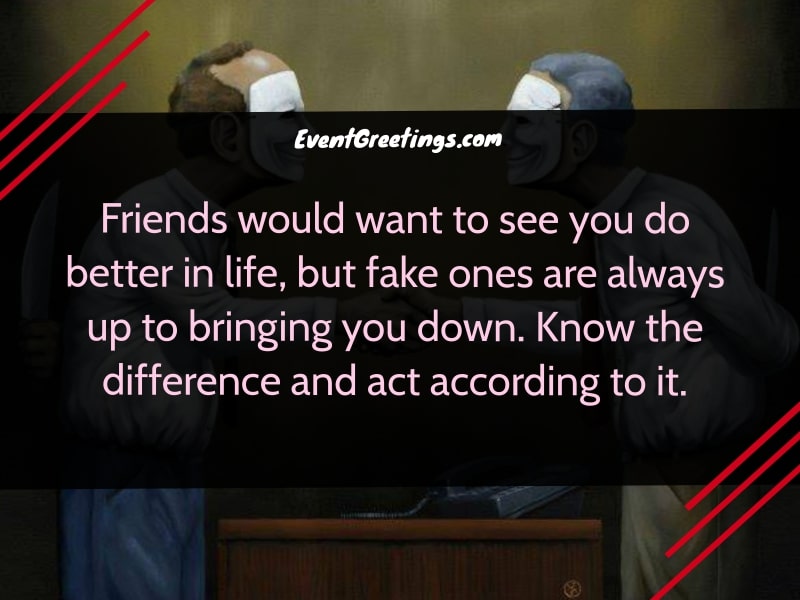 It’s hard to know who the real ones are. But the bad cannot pretend to be good forever. Sooner or later, the mask will fall off.

Lies are what differentiates between a fake friend and the real one. Real ones tell the truth while the fake ones lie to your face.

Some people are capable of bringing you down without feeling sorry and do the worst to you without any regrets. Be aware of such two-faced people.

Fake friends are just enemies disguised as a friend. In fact, they are worse than enemies. Enemies hurt us knowingly, while fake friends unknowingly hurt us. 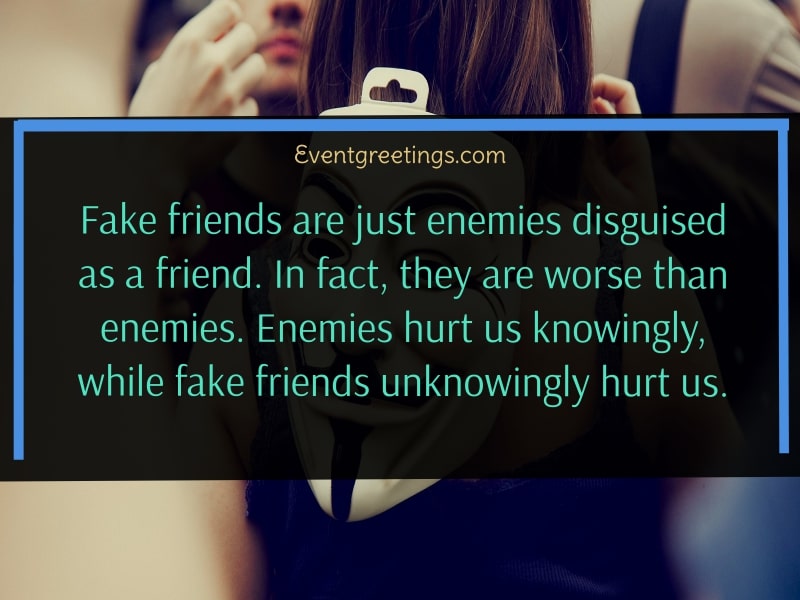 I prefer having an enemy by my side than having a fake friend. At least I will know that I am getting hurt.

To my fake friend, I hope you keep making the wrong decision of kicking me out of your life. I am sure one day you will die to come back. 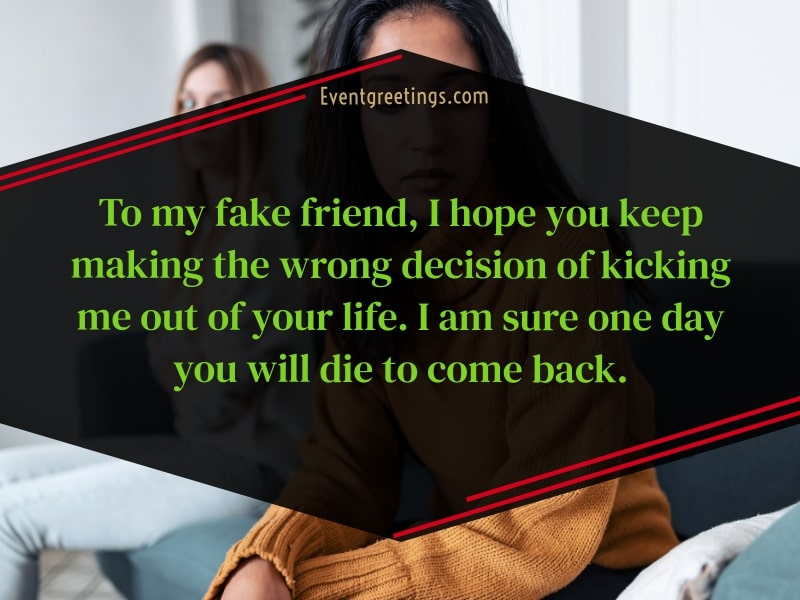 Your happiness is the worst thing that your fake friends would want to see. So, keep a smile on your face and watch them turn bitter.

God blesses only those people who have always been kind. And when he blessed you, I am sure your fake friends will regret every moment of treating you wrong.

Putting me down secretly won’t have a good impact on you. You will regret it the day I will openly let everyone know your true self. 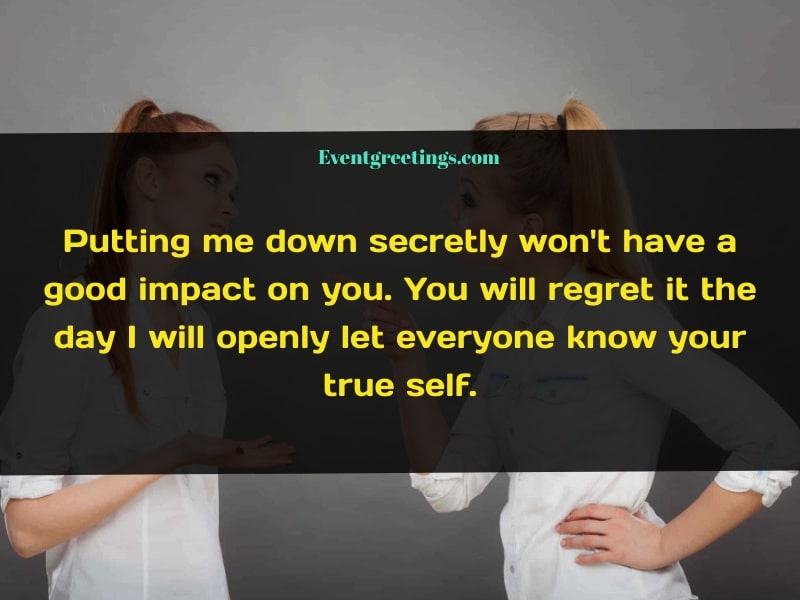 Two-faced people should not have any place in this world. They are the backstabbers because of whom people get the pain they don’t deserve.

Quotes About Friends Being Fake

When a fake friend tries to bring you down, try going higher and challenge yourself to beat the best you can. That is how you take your revenge. 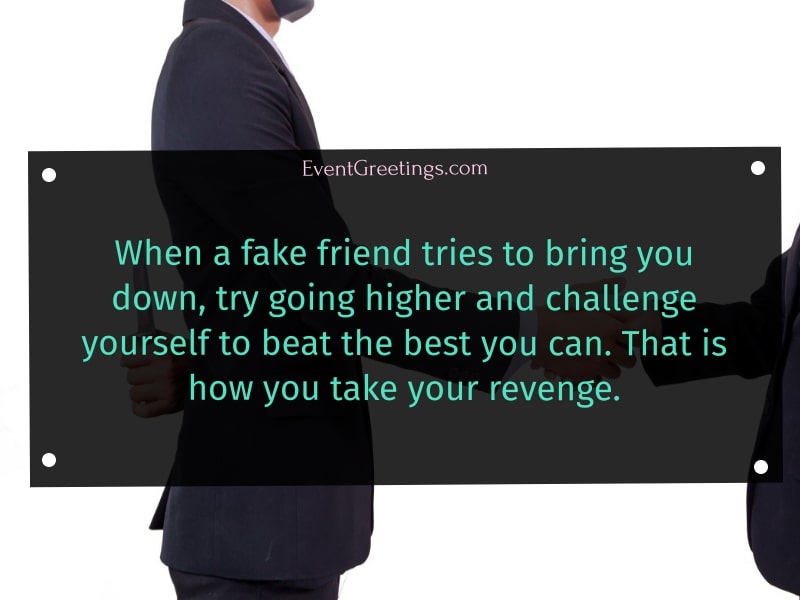 Why would we need friends if they have to be fake? We could easily play with toys instead, just as fake as them.

One way to know who your fake friend is and who the real is by succeeding. The real one encourages you, while the fake one tries to put you down.

There shouldn’t be any place for fake friends in your life. Someone as genuine as you deserve someone just like you in your life.

Not everyone who makes you smile can be called as your friend. Because one day they can make you cry too. 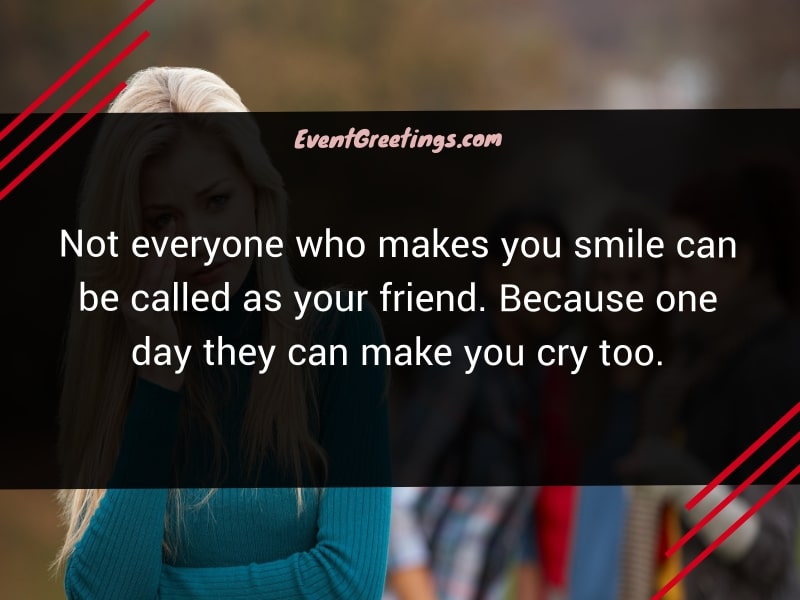 Good Luck in Your Future Endeavors-Message And Wishes